Home / About Us / History of WFA

WFA has had two name changes since its inception in the early l990‘s when it was registered as the charity Indian Agricultural Rescue Mission by Christine Townend.

Its purpose was to raise funds for animal shelters in India, and in particular for Help in Suffering Animal Shelter in Jaipur, Rajasthan, of which Christine Townend was appointed Joint Managing Trustee in l990. At that time IARM was an unincorporated association.

The Aims and Objectives and Constitution of WFA remain the same. 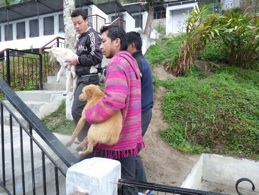 Community dogs, having been captured on the streets as part of the ABC programme are taken by DAS staff for kennelling, prior to spay operation. The dogs will be released in the place they were caught after a full recovery.