The co-founder of Animals Australia and Animal Liberation is urging the government to keep its promise to end the live export of sheep… and embracing the rise of Laboratory grown meat.

In politics, a promise is a dish best served piping hot.

The Labor government appears to have gone cold on it’s commitment to end the live export of sheep to the dismay of many, including the woman who was at the forefront of raising awareness about this inhumane trade.

“My biggest regret is not seeing an end to this cruel trade,” said Christine Townend OAM.

Christine was a leader of the first protests in Australia against live exports in the late 1970’s. Since then, she’s rid supermarkets of caged eggs and eradicated rabies in Indian cities with her transformative animal shelters.

In 2018, the group she co-founded, Animals Australia, came close to ending live sheep exports after showing then Agriculture Minister, David Littleproud, footage of sheep dying from heat stress on a ship travelling from Fremantle to the Middle East.

“I am shocked and gutted, “ Littleproud said.

“This is the livelihood of Australian farmers that are on that ship … This is their pride and joy and this is total bullshit that what I saw has taken place.”

A bill to ban the trade passed the Senate that year, but was narrowly defeated in the House of Representatives, with the ALP immediately adopting a policy to end it.

While live sheep exports have fallen in recent years to 575,000, from two million in 2017, there are still tens of thousands of sheep dying horrific deaths on long voyages in stifling heat as countless more survive only to suffer appallingly.

After promising to end the trade before the election, Prime Minister Anthony Albanese has alarmed animal rights groups by ruling out a ban in this term.

“We haven’t put a timeframe on that because we want to make sure that we consult with farmers and work it through in a cooperative way to make sure we get a win-win situation,” Mr. Albanese told ABC radio just two weeks after winning office.

“I am extremely disappointed but not surprised that even the question of the ban appears unlikely to be considered during the current term of the new government,” says Christine.

“There will be considerable pushback from WA and in my view, Labor will not wish to jeopardise its current standing in that state.”

The big question is what will happen to the ‘phase out’ if Labor loses the next election.

“I am concerned that if the government loses the next election the prospects of a live sheep exports ban will recede further into the distance, that the northern summer ban itself may be at risk and all the time the sheep will continue to suffer most dreadfully and inhumanely,” Christine says.

When Townend began protesting live exports and animal cruelty in the 1970’s she was branded in the media as ‘one of the most hated women in Australia’. Her campaign in 1980 led to a government report revealing, for the first time, the horrific conditions on board these ‘ships of death’.

“Christine really paved the way for so many other people… because she’s so humble and because she doesn’t do this as a form of self-promotion,” said Emma Hurst, an Animal Justice Party MP in New South Wales upper house.

As the wharf side protests gained momentum, The Adelaide Advertiser in 1982 ran a front-page photograph of Christine being thrown off the gangplank by one of the men loading the sheep.

“For her to be one of the first people, not just in Australia, but in the world to bring these issues up for discussion and debate, that takes some real guts to do that,” Hurst said.

Christine has also done it in India.

Walking with her husband Jeremy in Darjeeling in 1993 they came across a dog foaming at the mouth. It had been poisoned with Strychnine, which the locals used to try to stop the spread of rabies. The indiscriminate use of this poison condemned tens of thousands of dogs and other animals to an agonising death while failing to halt infections of Rabies.

Nearly 30 years later, Rabies has been eradicated in Darjeeling and Kalimpong thanks to the Working for Animals charity that Christine and Jeremy set up to build and operate animal shelters.

“The major programme of both shelters is a birth control programme ,the aim of which is to create healthy, rabies free and stable street and community dog populations,” Christine says.

“These programmes are really important because rabies is rife in India causing many human deaths each year.”

Now she is leading calls to end animal cruelty in food production through technology.

The cultivation of meat grown in laboratories is rapidly scaling up as regulators around the world realise this new form of animal protein will inevitably become a major block in the global food supply chain.

Cultured chicken is already approved for sale in Singapore, while the FDA in the United States is poised to give the green light, sparking a frenzy of new producers getting ready for market.

“I have no objection to it as it does not involve animal cruelty,” Christine said.

“I think it’s more likely that people will eat it than continue to eat factory farmed meat.”

Every year, 70 billion animals are slaughtered to keep us fed. The cultivated meat industry is expected to be worth $35billion by 2030. Some are predicting lab-grown meat could be available in Australia as early as next year.

“I personally would not eat laboratory grown meat as I have not eaten meat for 40 years and I have no desire to resume the practice now,” says Christine, who, at 77, remains happy living meat-free.

A 2020 joint study by the University of Sydney and Curtin University found, despite having a great concern for the environment and animal welfare, more than two thirds of Gen Z is not ready to eat lab-grown meat.

One startling reason for this reluctance is that eating cultured meat would conflict with perceptions of gender and national identity.

Since that study, the mood appears to be softening as the idea grows on people. A study in the scientific journal ‘Foods’ found 89 per cent of Gen Z in the US and UK would try lab meat.

We will all soon have the chance to try it.

“When we started in the seventies we’d go to a restaurant and order a plate of vegetables because there were no vegetarian options,” Christine recalls.

“Now we have plant-based ‘meat’ products that are actually more iron and nutrient rich than animal meats,” Christine said.

Today, it is estimated as many as 10% of Australians, or 2.5 million people, are vegetarian or vegan.

Investors and manufacturers are banking on wooing the hundreds of millions who remain firmly attached to their steaks and snags.

But can they convince them to eat ‘Frankenmeat’?

“Because these products are new in Australia, they are considered novel ingredients and novel foods under the Act, whereas in the US and other countries they are not novel because they are actually exactly the same, it is actually flesh.”

While the use of cell cultures has been around for a long time there are still some unanswered questions about Cultured Meat. Can it be commercially made without supplementing Foetal Bovine Serum to promote growth? Does it spoil at the same rate? Does it allow the same growth of harmful microbes? What is its shelf life and nutritional qualities?

These questions are being addressed and the food industry is gearing up for mass production. If all goes to plan, factory farming of animals could be phased out by the middle of this century.

Christine may not be here to see that but hopes she will live to realise her dream of an end to live sheep exports.

The new government says it hopes to negotiate an agreed phase out with the industry to allow it to find new domestic markets. There is no plan to end live cattle exports.

In the meantime, Christine is making great strides in her latest campaign to free elephants in India trapped in a life of hopeless deprivation and pain to service the tourist industry there.

As one of her close friends and fellow activists put it, “In the animal kingdom over which we rule, Christine Townend is a lion, leading us towards true equality for all living things”. 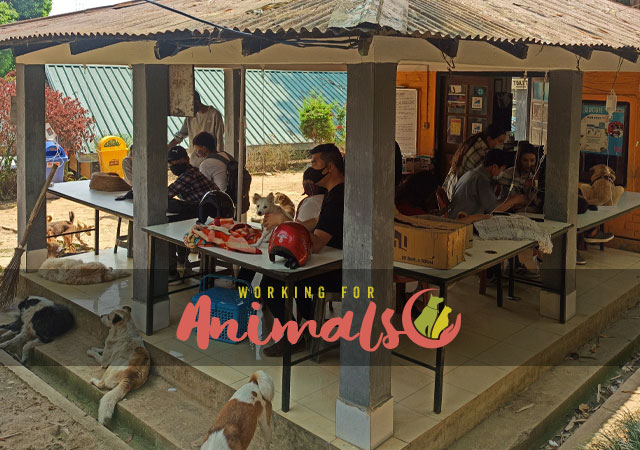