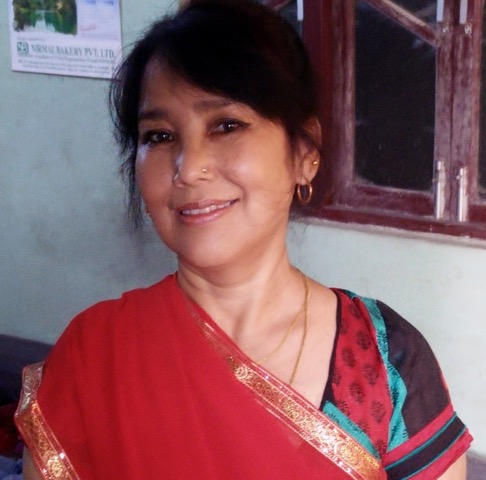 I was staying in Kurseong, visiting friends and relatives. It’s a town about one and a half hours’ drive from Darjeeling, on a ridge with beautiful views of the Eastern Himalayas.

Minu, a stray cat, had been abandoned nearby as a baby. I could not turn my eyes away and leave her, for I knew stray dogs would harm her. I brought her to my tiny living space and fed her, kept her warm. I knew I could not give her a permanent home but she would be fed and given place during the wet and cold days during which time I would be in Kurseong, and therefore a chance to grow strong and fend for herself.

After about a month or two, I saw another grey kitty abandoned, lost and hungry. I gave him home and care, calling him Munu. Then I rescued a third cat, Browny, a handsome fawn male cat, bushy coat and tail like that of a squirrel’s. He would be ever scared and hiding, but I befriended him and he came for meals. A white, greasy homeless and hungry male cat found place for meals and warmth with Minu, Munu and Browny. I named him Motu. I could see that he was not young and had managed to survive some seasons.

Minu was growing and soon she would be in heat. I had to have her spayed for my stay here in Kurseong was short. There was a Government veterinarian here that I knew, for, as a child I used to take my pet chickens to him for vaccinations. The vet was on sick leave and the staff told me spay was not possible: it could only be done at the Darjeeling Animal Shelter, Lebong (Darjeeling), about one and half hour’s journey on shared cab from Kurseong. I phoned the vet at Kalimpong Animal Shelter – Dr. Deo Pandey. He said the animal shelter could not visit just for spaying four cats, as it would be too expensive and time-consuming, but if I could organise a camp a team of vets would come for ABC in Kurseong from Darjeeling and Kalimpong Animal Shelters provided…fifteen to twenty animals were ready for spay.

In the mean time I found a white kitty abandoned in a gutter, barely twenty-five days old..well..I could not leave him there to suffer..or for the dogs, so he too came home in my pocket, feeding him milk from a medicine dropper he survived. He is completely white, so named him Polo.

By now Mini had delivered her kittens, after forty-five days I had to spay her. My time to leave Kurseong was near and I had to find loving homes for Minu’s kittens and Polo too.

Aware that the vets would come for ABC to Kurseong only when more animals were ready for spay I visited neighbours with pets and encouraged them about spay, four of them agreed..with my three cats..I now had seven cats ready for spay. Not enough as yet to make the vets visit Kurseong.

I had sent an email to a website address and surprisingly the immediate morning I had a response from far away Australia, it was from Dr Christine Townend. Encouraged by Dr Christine’s response I exchanged further emails. Seven cats was all I could gather..and..to my joy Dr Christine wrote seven was good enough for the Goodwill Team to visit Kurseong. I could not believe…. Was I reading the email right? Would this really happen??

Dr Christine replied to all my mails with no loss of time. She understood my stay in Kurseong was till the end of June, I would be returning home to Port Blair. She was in regular contact with Darjeeling and Kalimpong Goodwill Shelters along with me, co-ordinating early visit by the Goodwill team to Kurseong. She asked my phone number so that Dr Deo Pandey from Kalimpong Animal Shelter could inform me about their schedule. He did ! He sounded kind and caring. On 23rd June afternoon he called me to inform they would be in Kurseong on the 25th June for the ABC. Both Darjeeling and Kalimpong Goodwill would be here in co-ordination with Kurseong BLD officer, Dr Tapan Chettri. The venue he said was BLD office from 9:30 am. I asked Dr Deo if I could donate whatever I could instead of the regular fees he said, “ certainly ..any donation amount will do”.

I had already posted the news on facebook local group in order to reach larger society. After Dr Deo’s confirmation I updated the information on Facebook and met locals initiating all to benefit from this camp. I remember feeling as if I was dreaming..my feet were not on the ground!

The system we are used to never work this way, there are too many twists and turns, and eventually we reach a dead end. Dr Christine from another continent was reading my mails and replying…she cared..yes she cared..for the simple love of animals!

Came 25th morning, I had two cartons ready with air holes. Since Minu and Browny don’t get along I kept her and Munu in one cartoon. Browny did not fit in the other cartoon so he was put in my son’s backpack. It was raining, with umbrella and cartoon mother and son left home.

Rahul, my son hired a cab and thank goodness we now we were in it, Minu had nearly escaped, I sat huddled on the roadside holding the umbrella and the flimsy cartoon as hard as I could. It was a relief to be in the cab. Down the hill we went, BLD office was further than Veterinary site, but we reached. The cab driver was keen on dropping us off on the road, whereas the BLD office was just ahead with road leading right in front. I requested him to drive till the end, it would help us a lot with the cats, umbrella and rains. He lamented about petrol price…I tried making him see a bit of sense. How much more petrol would he waste by driving few yards further. He bargained for Rs 20/- more..saying 20/- is not much he had asked, I bargained my side saying..Rs 20/- was not much to lose if he let it be and so we reached safely right in front of the site.

People had already arrived with their pets and tokens were being issued. I saw banners, a blue banner said, “ Thank You Animal Protection Network Sweden” I introduced myself and greeted Dr Deo. I found him to be gentle and soft spoken. He said the team from Darjeeling were yet to arrive and then they would begin with the surgery. I registered my cats and got the token. Now Minu was creating problem. Munu is timid so he was quiet. Browny needed an opening of the backpack every now and then for air.

Soon the surgery began, first it was a doggy. She was laid on the sterile blue polythene sheet that was prepared for the animals. The Goodwill staff advised the owners of pets to keep them warm after surgery which we all abided to. Two operating tables were in function. One had a lady vet performing the surgery the other had Dr Deo. Goodwill staff clad in blue jackets and gloves were every where….helping, advising taking photographs and the like. One after another the spayed animals were laid on the sheet with respective concerned owners keeping them warm..tending to them. I saw a girl shed tears seeing her pet being pricked for anaesthetic and taken for surgery caught by her mane. She sat by her pet’s side, caressing her, keeping her comfortable and warm, till it was time to take her home. Her tear streaked face lit up in smile when the doggy stirred out of unconscious state.

Dr Deo was busy, but I saw him come at intervals among us to inquire if everything was fine.

My token number was twelve and soon my cats were taken for anaesthetic, cleaning of furs and the surgery. Soon one by one they were laid on the blue sheet…so also rest of the animals. I had not carried any warm shawl or blanket with me, the cats needed to be kept warm and so I took off my jacket and covered them. The assistants came to check, so that the doggys and cats would come out of unconsciousness in time. People were allowed to take their pets home after they gained conscious.

A lady with two cats and I discussed our return, there were people with cars but they left before us. Dr Chettri requested Ex- Chairman of Municipal ( he had a pug) to drop us home, I also asked if he would give us two ladies a lift, he said he would. After few minutes….he had quietly gone away! It did not surprise me. Dr Chettri must have been aware because after some time he told us their Blue Cross Bolero was arriving and we would be dropped home. Sure enough, I saw the white Bolero with Blue Cross logo near the driveway and told the lone lady to get ready with her cats. I made my way upstairs and donated my gratitude to the cashier. A staff issued us registration cards which had our pet’s details and the date for next vaccination.

Browny the fawn male was gaining conscious and started sleep walking, Minu and Munu were blinking their eyes ever so slightly, it meant they too would soon be conscious. Surgery was still going on, I saw both the doctors masked, in surgical gloves, head bent, assistants in aprons and surgical gloves helping them. A blue sheet covered the animal on the operating table which had a slit/ opening at the centre from where the doctors performed the surgery, they also had a stand which had saline running to the animal under operation.

The driver was ready to leave and so were we. I could not thank Dr Deo as he was busy in operation. The staff who was taking photographs took some more of ours, I thanked him. I was dropped at my place, the driver helped me with my cats and I thanked him. The lady along with me would be dropped at her home.

It is six days now, the cats are doing well and the wound is healing. Minu’s kittens have found their foster home in Sonada, Polo is adopted by a teacher couple…

I will be leaving Kurseong with a sense of great satisfaction, Rahul’s friend has taken over our rooms, he will live here and this is another blessing as the cats will not be left homeless, they will have their space and will be taken care of. What more could I ask for.

With everything fitting in so perfectly I feel light hearted and blessed. I do not have enough words to thank Dr Christine for her support and care to make this possible, she will forever be in my heart. Dr Deo and the team of DAS and KAS did a great job in a short time span, I am indebted to them all. I hope in future regular ABC camps are organized at places where this facility is not available and more awareness is spread among the mass at remote areas. The continuous effort of Goodwill Animal Shelters will surely bring in a lot of positive changes and difference to Animal Welfare in this Himalayan Region.

The love of street dogs