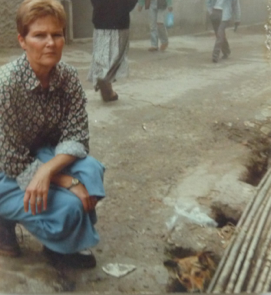 The building of the animal shelter in the Darjeeling suburb of Le Bong, was completed in 2008.

We are especially grateful to Dr Naveen Pandey who worked with architect Ashok Pradhan and builder Dhiren Lama to ensure a beautifully strong and functional shelter was built on the difficult sloping site.

In l993 Christine and Jeremy Townend were walking along the narrow winding road above Darjeeling when they saw a dog, foaming at the mouth, her lips and tongue blue, her eyes starting from her head in terror, as she crawled along the gutter, struggling for breath. (The rough snap above shows the dying dog). A man leaning on the counter of his small shop told them that the dog had eaten strychnine, which was being thrown around Darjeeling town by the Municipality in order to kill the community dogs, which the municipality blamed for the spread of rabies.

The sight of the suffering dog, together with the knowledge that over the years hundreds of dogs would die slowly for the same reason, resulted in Christine’s determination to start an ABC (animal birth control) programme in Darjeeling, based on the same methods as were being used so successfully at Help in Suffering Animal Shelter, in Jaipur Rajasthan. She and Jeremy were well-placed to start the programme in Darjeeling because they had set up the programme in Jaipur at the behest of the World Society for the Protection of Animals, according to WHO guidelines, in l994. They knew it could work if properly and carefully implemented, with community involvement.

However, it was to be more than fifteen years before the shelter could be completed in Darjeeling, and an agreement signed with the Municipality that no more dogs would be killed so long as DAS (Darjeeling Animal Shelter) was running an ABC programme.

In the interim, due to the difficulty of finding suitable land in Darjeeling, land was purchased in nearby Kalimpong, and a shelter established.

The core funding for the running of the Kalimpong Animal Shelter (KAS) since its inception has been provided by Animaux Secours in Arthaz, France.

In 2002, the President of One Voice, Muriel Arnal, learnt about the need for an animal shelter in Darjeeling, and One Voice offered to provide the funds to purchase the land and build the shelter. Eventually, after a difficult search, and with the assistance of Mr. Dhiren Lama, long-time volunteer and supporter of DGAS, a beautiful but steeply sloping block was found. Although this plot of land had the advantage of a permanent spring which could provide much-needed water for the future shelter, it also meant it would be more difficult to build on a site with marshland. An architect, Mr. Ashok Pradhan, who was expert in local building conditions was contracted to help. After various tests had been completed, it was determined that the land was suitable for building.

Mr. Pradhan, together with Dr. Naveen Pandey, worked together over the following year to design and oversee the building of the shelter.

We were fortunate to have Dhiren Lama as the builder, for he ensured that the building was built with the best quality materials that could with-stand the difficult climatic conditions of the Darjeeling Himalayas.

Building the shelter was a difficult task due to the slope of the land and the monsoonal downpours but the effort and dedication put into its construction has resulted in a strong building which hopefully will endure far into the future to provide protection and care for the animals of darjeeling.

In the first year of operation due to the work of the DGAS team, over a thousand dogs have been caught, vaccinated against rabies, identified with an ear notch, spayed, and released back into the place where they were caught, never to breed again and never to spread rabies. Thus potentially thousands more dogs have been saved from poisoning by strychnine and the citizens of Darjeeling are gradually beginning to accept that a friendly, safe street dog population is worthy of respect and protection