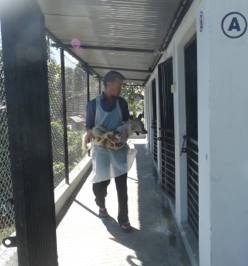 A block kennel, with Rudra holding a dog which as been operated.

Three days per week, at 5.30am, when it is still gloomy and cold, and before the narrow winding roads of Darjeeling become jammed with jeeps and cars, a team of three staff leave the shelter in Le Bong to catch dogs for the ABC (animal birth control) programme, in the specially modified jeep.

Due to the ABC programme conducted by DAS, the municipality has now ceased all poisoning of dogs in Darjeeling. Although there were many initial problems to be solved by the first manager, Catrina Vear, and her husband, veterinary surgeon Dr. Yogesh Sharma, in the first two years of its operation, from November 2008 to November 2010 over two thousand dogs were caught, vaccinated, identified with an ear-notch, spayed and returned to the street to the place they were captured. Catrina and Yogesh have now left the shelter, to start a new life in the USA. Veterinarian, Dr. Shivani Pradhan is now working at DAS, and Bidya Tamang has become the new manager of the shelter.

Staff in the shelter’s prep room, preparing a dog for the keyhole flank spay operation.

In the year May 2010 to April 2011 (see annual report) 644 dogs passed through the ABC. On average about 700 dogs pass through the ABC programme annually. The reason for the slightly reduced number is due to the fact that the remaining unspayed, unvaccinated dogs are more difficult to find and catch.

Previously, the poisoning of the dogs by the municipality had not only been cruel, but it was also ineffective as dogs breed rapidly to fill an empty biological niche. Hence it would not take long for the Darjeeling citizens to once more see gangs of dogs fighting over rubbish or roaming the streets. The great benefit of an ABC programme is that it creates a friendly, rabies-free, street dog population.

Subash holds a kitten which was handed through the window to him by an owner who did not want it.

People see the staff in the shelter vehicle collecting and releasing dogs and soon the word spreads that dogs are a presence to be valued.
The great cruelty to dogs, practised by the local citizens out of fear and desperation, such as wounding them with the kukuri (Nepalese knife) breaking their legs with stones, or beating them with sticks, ceases when value is given to the lives of dogs, and it is known that they are no longer dangerous.

The people of Darjeeling have consistently commented that they no longer see lame and mangy dogs hobbling round the town and fighting in the garbage heaps. The aim of DAS is to ensure that the programme is continued for the benefit of both people and animals, far into the future, so that the relationship between the community and their dogs is deepened with increasing respect, trust and understanding. An ABC programme not only prevents rabies, and not only prevents over-population of dogs, but perhaps most importantly of all, demonstrates that humans and animals can live side by side in harmony and mutual understanding. 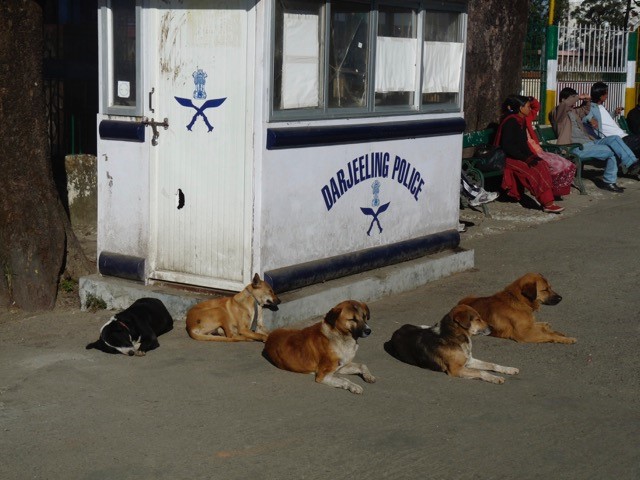 Many thanks to One Voice (France), the organisation which funds the running of the Darjeeling Animal Shelter (Le Bong). We also wish to acknowledge assistance provided by the Animal Welfare Board of India for the purposes of the ABC programme. We also thank Animal Protection Network (Sweden) for their assistance with the funding of a cat ABC and camps.