There are approximately 24-32,000 wild elephants in India and of these it is estimated that some 3,500 live in captivity. Of concern to WFA are traditional training methods which involve the concept of domination, and of bullying to break the spirit of the freshly captured wild elephant. The belief prevails, born of thousands of years of capture and training, that the elephant must have fear instilled into its psyche so that it is afraid of its mahout and willing to obey. The method used is generally the practice of securing the terrified wild elephant by stretching the four legs and tying the front two legs together to a stake in the ground, whilst stretching the back legs behind, and again roping them together, thus immobilising the elephant in a particularly uncomfortable position.

These methods have not changed for hundreds of years. In his famous book “Management of Elephants in Captivity”, first published in l922, AJW Milroy describes how the wild elephant is restrained by ropes, struggling to free itself: ‘the animal’s fore and hind legs are tied to a tree so that it is in an uncomfortable stretched position and its neck is fastened close up to a post in order to curtail the range of its head and trunk… the trainer gives his charge a sharp poke with a stick at the back of its ears; the halt (of gait) is taught by the clout between the eyes (with the ankush) administered at the moment the koonkies (trained elephants) halt, and so on.’

The method is described in even earlier accounts such as “The Menageries”, 1860, by W. Ogilvy (digitalised by Google). Ogilvy describes how the animal is tied and left for about three to four days without food or drink (p.145).

He also makes the point that the elephant is rendered obedient by ‘impressing him with fear as well as affection.’

He writes: ‘When the elephant is securely tied, it is beaten and deprived of food and water, until, bellowing and groaning in pain and exhaustion, it collapses and submits to the domination of the trainer. The ankush, (hooked, pointed iron prod) is used ‘ to direct him (the elephant) by catchiing hold of his ear or pressing it into his skin. To this rough monitor he gradually yields entire submission as the horse submits to be urged on by the spur (145)’ 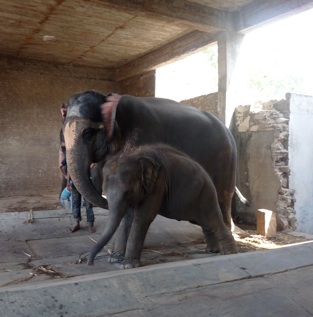 Fortunately, thanks to the work of Wildlife Trust of India, Dr. Andrew McLean (head of Training, of Human Elephant Learning Programme), and Working For Animals, alternative methods of training elephants, which involve no fear, cruelty or forced submission, are being introduced to India. A parallel can be drawn to the ‘breaking-in’ of equines, based on the same theory that cruelty will cause fear and submission. However, it is now becoming known in the horse world that it is possible to train even the most flighty of horses through understanding and communication, and without the use of any fear or cruelty. Similarly, there are humane alternatives available for elephant training, alternatives which do not involve the use of the ankush (the hooked iron goad), which involve the principle of mutual understanding and trust, as opposed to domination and submission.

Dr. Andrew McLean of HELP has developed a method of animal communication which involves pressure application and withdrawal. See www.aebc.com.au. No ankush, no spurs, no sharpened or spiked bits are required – only understanding and communication. The AEBC approach is unique in that it combines classical training with a strong emphasis on scientific understanding of animal psychology and behaviour. Decades of research have produced the world’s first evidence-based system that is both ethical (does not have negative welfare implications) and is sustainable.

Whilst this method has been successfully developed and utilised for equines, it is still not fully accepted or practiced with the breaking-in of elephants in India. WTI, WFA and AEBC are working to introduce these successful methods to be used for captive elephants in India. Ideally, elephants deserve to live in freedom in their homelands, but sadly this is not always possible, with decreasing habitat and expanding human development.

Dr Andrew McLean had also visited Nepal in 2008 and his work of introducing humane elephant training can be downloaded from ABC TV Catalyst archives at www.abc.net.au/tv/geo/catalyst/vodcast/2009.htm

In March 2011, Working for Animals assisted in the funding of another successful camp, held in Assam and organised by Wildlife Trust of India. This camp was particularly successful because all the elephant experts who were present were able to witness a young elephant being ridden after one day.

Ideally every elephant should be free to fulfil its behavioural needs, to know the smell of the jungle, to bathe in the river, to enjoy the companionship of the herd, and to migrate along ancient routes. But dwindling habitat, and the ancient traditions of capture and employment of elephants for human purposes, has resulted in a situation where, throughout India over 3,500 elephants stand in chains, are marched through crowded congested streets, or subjected to isolated misery in zoos and temples. If captivity is unavoidable, then at the very least the needs and interests of each elephant must be satisfied and the relationship between human and elephant must be one of trust and understanding, in which fear plays no part.