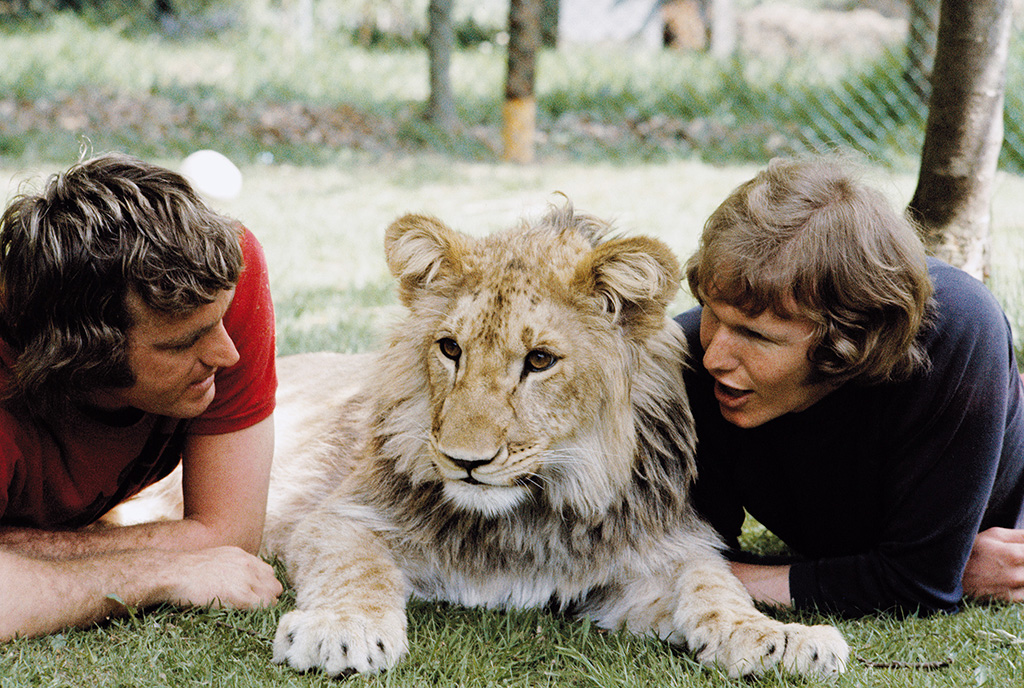 Christian was born on the 12th August 1969 in an unprepossessing and long closed down zoo in Ilfracombe, Devon, UK. Who could have imagined after five generations of captivity in Europe, he would be returned to Africa, and be successfully rehabilitated by George Adamson of Born Free fame?

For those unfamiliar with Christian’s story, see his website alioncalledchristian.com.au.

I am most often asked what happened to Christian. No-one knows. Christian was last seen by George Adamson in early 1973 when he was nearly four years old and was growing into one of the largest lions George had ever seen. He had survived the most dangerous years, although life as an adult lion would also always be very challenging. George thought he was looking for a territory of his own, away from the aggressive local lions of Kora. We like to think Christian created a pride of his own and lived at least the average 10 -12 years of lions in the wild.

Christian remains very popular and I continue to get many emails from nearly everywhere – often in waves from another round on Facebook, or as other countries discover him – like India more recently.

It was the posting on YouTube in 2008 of our reunion with Christian in Kenya in 1971 which brought Christian’s story back to a new and wider audience (100 million+ views), and our clip was recently listed as No. 5 on the top 20 to 1 Viral Sensations (Channel 9).

Sony bought the rights to our story in 2008. Given Christian’s enduring popularity, and the many relevant issues his life exemplifies, I am disappointed that many years have now gone by and sadly we are no closer to going into production. My feelings are exacerbated by the fact that there is such a crisis in wildlife, indeed we are at a tipping point for many species, not only lions, elephants and rhinos. Christian’s story could possibly make a contribution to generating more urgent action on behalf of animals in the hope of saving and protecting lives.

I’m relieved I’m not presently writing or commentating about the precarious state of the world which has unravelled even more dangerously than when I last blogged. We all deal with uncertainty and anxiety in different ways. I find it very relaxing living near the water, beside a National Park on the edge of Sydney.  I like to walk, garden, read, spend time with friends and family, listen to Radio National, spoil the cat, and even do some interesting work! Despite the criticisms – and the costs to Brazil and the local population, I’m loving watching the Olympic Games and am, so far, finding it life-affirming.

GAWPT:  Leonardo DiCaprio is such a great advocate for the environment and through his Leonardo DiCaprio Foundation has recently donated US$15.6 million in grants – towards wildlife and habitat conservation, to aide indigenous rights, and to combat climate change and solve environmental issues. Visit his Facebook page here.

Included among the “grantees” in Africa are the George Adamson Wildlife Preservation Trust (GAWPT)/ Mkomazi Rhino Sanctuary, and the Elephant Crisis Fund (in partnership with Save the Elephant) – both very worthy recipients.

WFA: Working for Animals has a new website www.workingforanimals.org.au primarily about the WFA animal shelters in Darjeeling and Kalimpong in India. I am on the Committee of WFA and will contribute to News and Blog items from time to time. The founder, Christine Townend, is very well known internationally for her pioneering work in animal welfare and rights, and is well informed about the most pressing animal issues and debates world-wide.

We both hope to attend the upcoming Federation of Indian Animal Protection Organisations (FIAPO) conference in Mumbai 21-23 October 2016. We spoke at the last FIAPO conference in Jaipur in 2014 and look forward to hearing wonderful and dedicated people talk about the successes and advances made in animal welfare in India, despite the many challenges.

WFA will continue to post information about various campaigns – and I remain especially concerned about canned hunting in Africa, and the continuing captivity of Tony the Tiger at the truck stop in Louisiana.

TIGERS:  I remain very excited about seeing tigers at close quarters in the Ranthambore National Park in India earlier in the year. On my return I watched several fascinating David Attenborough tiger documentaries, but as they were made several years ago, I hope the poaching and sale of tiger body parts and skins, and the flawed assessment of tiger numbers in the wild etc, are now more closely scrutinised and policed. Many issues conflate including the pressures of balancing sustainable tourism, competition for resources, the danger of wildlife to local villagers, and the expansion of wildlife corridors etc.

Officially, there are 2266 tigers approximately in India at present and 70% of the world’s tigers are in India. The most recent WWF survey states that 3890 tigers remain in the wild. I think seeing tigers up close reminded me of just how privileged I have been to know – and love – a big cat, and to be reminded of their magnificence, their power, and how they need us to fight – harder – for their survival.