This is the first e-newsletter from Working For Animals and I want to say thank you for all your support. Because of you we have been able to save the lives of thousands of animals in the foothills of the Eastern Himalayas, in the towns of Kalimpong and Darjeeling, and in the remote villages, tea gardens, and hamlets of Darjeeling District.
The Clinic at Kalimpong Animal Shelter

I am writing this newsletter from Kalimpong Animal Shelter where I have been staying for the past month. I am so proud to see the way this shelter has grown. Checking the summaries of reports, I see that since its inception in 1995 the shelter has spayed about 7000 dogs, vaccinated 25,000 animals against rabies and given over 61,000 treatments, mostly to dogs and cats, but also to goats, pigs, rabbits, cattle, horses, hens and even monkeys and donkeys. In the past year, the Darjeeling Shelter has carried out a total of 687 dog spays and 129 animal rescues, most of these being dogs or cats injured on the roads, abandoned, or attacked with stones or knives. In total KAS (a bigger shelter) gave 8054 treatments in the last year, and DAS treated 4813 animals: all this despite numerous political strikes and closures, long distances to travel to distant villages, and the rising cost of fuel to conduct the camps.

I started the shelters in Kalimpong (1995) and Darjeeling (2005) because I saw dogs being poisoned with strychnine in an effort to control the spread of rabies through the street dog population. Rabies was rife in the villages and towns throughout The Hills. Not only did I see a dog being poisoned with strychnine, crawling in the gutter, its tongue blue, gasping for breath and taking over fifteen minutes to die, but I also saw a child dying of rabies, frothing at the mouth, his mother holding him in her arms, a desperate expression on her face. Coming from Help in Suffering in Jaipur, I knew that a successful spay-neuter-vaccinate campaign would work. Buying land, building the two shelters (with generous funds from Animaux Secours and One Voice in France) the help of volunteer vets from abroad, and much support from the local people, meant that we could approach the Municipalities of Darjeeling and Kalimpong, explain to them how an ABC (animal birth control) programme works and gain their co-operation in the cessation of all dog poisoning. This is why the lives of thousands of dogs (and people) has been saved.

At KAS, there are almost two acres of gardens in which the kennels, dog-runs, operating theatre, office, dispensary, vet’s house, volunteer’s hut, manager’s house, and kitchen are located, as separate buildings. There is enough room for many of the healthy dogs to be free during the day, although ABC (animal birth control) dogs are kept kennelled before and after the key-hole flank spay, and anti-rabies vaccination. When recovered, they are put back on the street in the place they were caught.

While I have been here with Julie Tolhurst, Queensland vet and fellow-trustee, we have held a joint meeting of Darjeeling and Kalimpong Shelter personnel. This has been important, as we have been able to exchange notes. As winter approaches, more sacks have been ordered, so the dogs can sleep on warm wooden platforms or in boxes, off the floor. Darjeeling Animal Shelter is fortunate to be built on sloping ground, with several small springs, feeding tanks which supply water to the shelter. Kalimpong Animal Shelter draws its water from a spring, 0.8 km from the shelter. The water is carried in pipes to a huge tank. Nonetheless during the dry season, the water supply can become a problem. 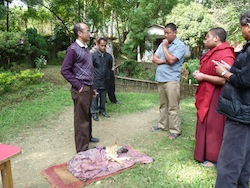 Among the many cases which I saw treated, one in particular stands out.

A small brown dog, named Bhuti, was brought to the shelter by two Buddhist monks from Pedong, a journey of at least a couple of hours.

‘We accidentally ran over this dog’, they said, ‘Do anything, but please save her life’.

I could see one back leg had been completely smashed, the bone of her hip protruding from raw, exposed flesh. It seemed that, not only had her back leg been damaged, but that she was paralysed.

‘There’s no use amputating a back leg if she can’t use the other one’, Dr. Pandey said. However this was no ordinary dog. As if understanding the conversation, and despite all her pain, Bhuti looked up and, wagging her tail, moved her remaining back leg.