Since its inception Kalimpong Animal Shelter has been playing a vital role in rescuing animals especially beautiful stray dogs that are left stranded on the busy streets of Kalimpong town or on far-flung areas where animals are sometimes inflicted with knife wounds, or have acid thrown at them, resulting in terrible wounds. Over the years, Kalimpong Animal Shelter has been focusing on Animal Birth control to combat animal suffering. Thus, camps are organised by the Shelter on a yearly basis in different parts of Kalimpong town which outreach the villages together with their animals in need. Such camps have been immensely fruitful bearing positive results at the end of the day reflected in the happy faces of local village people.

In the recent past, the Shelter conducted a camp which was held at Munsong, located at an elevation of 5000ft near the Kalimpong and Sikkim border with views of the majestic River Teesta, and Mt.Kanchenjunga. the third highest mountain in the world. Munsong has attracted numerous tourists from different Indian states and also from overseas. It is a peaceful village with small hamlets and a few well-built houses. Many local tourists throng the beautiful village each year for sight-seeing and photography. On the 19th of February, the camp was conducted by the local Buddhist monastery under the supervision of the shelter vet, Dr.D.P.Pandey followed by his assistants, Lil Thapa, Mahesh Chettri and Lakpa Lama. There was a huge gatherings of owners with their cats and dogs and young children.

For the past three years the Buddhist monastery at Munsong has been very supportive in assisting KAS with ABC (Animal Birth Control) camps. At the camp there were, in addition to the village people, some pets owned by the monastery, the monks of which requested their spaying and neutering. The Shelter Most of the animals were not vaccinated previously so the staff dedicated themselves to every detail issuing health cards to the owners after their animals had been vaccinated. The total number of dogs that were vaccinated rose to 65, and also 13 cats. Other than that, there were 19 dogs for their neuter and spay.

On one hand, it was a beautiful flow of animals with their owners and children with bright smiles watching patiently the undergoing surgeries, but on the other hand, it was sad to watch a few dogs suffering from kennel cough, and viral diseases such as distemper and parvo. Yet, despite the throng, every animal was treated properly with proper care.

Although Dr. Pandey was busy, basically operating all day, he still managed to examine some of the ailing dogs infested with scabies and suffering from viral ailments. It was a long day in a far off place, away from home and family, but only for a day, it was memorable with imprints of happy faces of children and seeing their concern for their animals. The staff with tremendous effort and dedication made the camp a grand success. 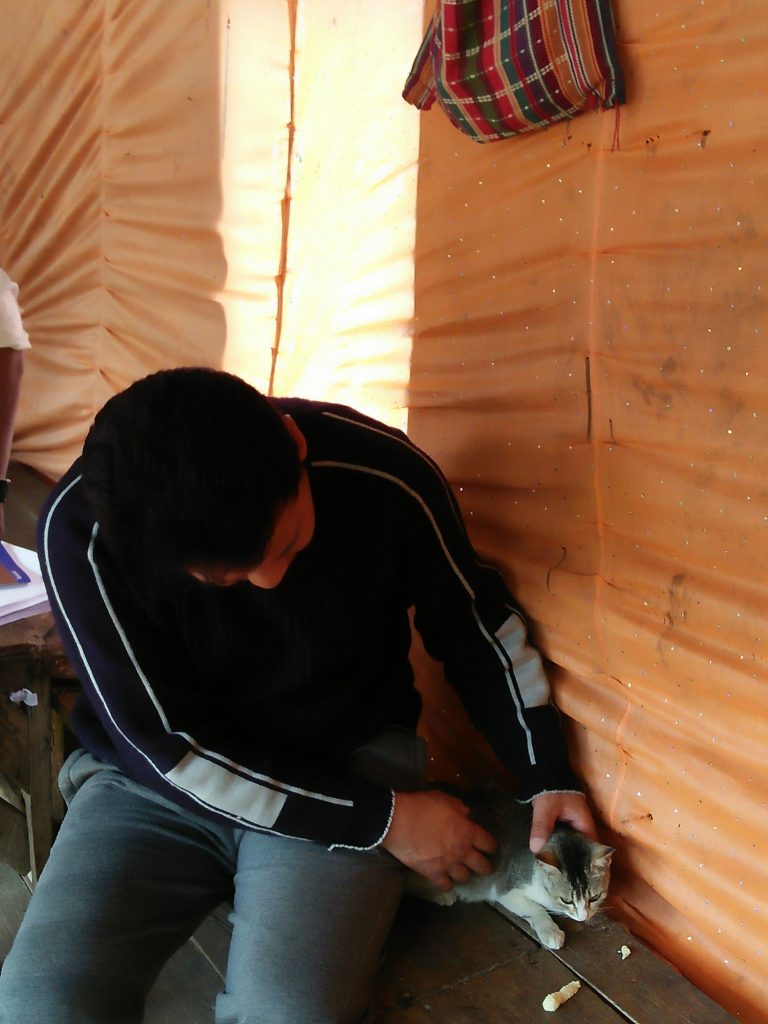