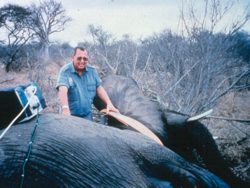 In 1988 Professor Jay Kirkpatrick visited Australia at the invitation of Animal Liberation, in order to encourage the development of immuno-contraception. His letter below outlines developments since that time. For further information visit the website of The Science and Conservation Centre: http://sccpzp.org/SCC_Fertility_Control_Brochure_1_.pdf

The fertility control work here goes well, albeit with small and large hurdles placed in the way by opponents. Nevertheless, we march onward and treat more animals every year. PZP (porcine zona pellucida) vaccine has now been used safely and successfully in more than 85 species of animals.

Up until 1993 I labored at this endeavor at Montanan State University-Billings, much like any other academic engaged in research. But by that time it occurred to me that the mission to promote use of an immunocontraceptive vaccine for wildlife had no real future anchored in academe, with all kinds of other pressures and institutional politics in play. Consequently I left the university and created a non-profit organisation – The Science and Conservation Center. We found a home on the grounds of our regional zoological garden, because of the zoo industry’s massive interest in and application of fertility control to captive wildlife. The next task was to set about raising the money to build our center. We have a modest building with laboratory space, offices, etc. and we moved into the Center in 1998. The Center’s human resources consist of a staff of three and we produce the vaccine, do the quality control, manage the databases, train folks to use the vaccine, and about a dozen other things. During the past 14 years we have expanded the application of fertility control well beyond anything I thought we could ever accomplish. Our zoo work expanded and today we provide vaccine to zoos stretching from Perth, to the Yukon in Canada, across Europe and to the Middle East. We have treated thousands of captive animals representing more than 85 different species. Of course, our wild horse work is central to what we do and that is expanding every year, from just the government-managed horses, to sanctuaries and now tribal horses. Then, in 1996 we began the elephant work in South Africa. That is a story in itself but it worked, and today elephants are being managing all over South Africa, in 14 different wildlife parks. I find it very satisfying to know that literally hundreds and hundreds of elephants no longer face the prospect of culling because of this work.

The elephant project was a real learning experience. It soon became obvious that we could not produce sufficient vaccine nor could we keep traveling to RSA, so we brought the African personnel to Montana, trained them to make the vaccine, Kim and Robin (my colleagues here) went back down and helped them set up their lab, and today the Africans are self-sufficient. It is a model for a lot of what I see looming in the future.

We also have used the immunocontraceptive vaccine in many other projects that have been successful, such as water buffalo on the U.S. naval base in Guam, elk in a national park, and now bison on Catalina Island. Only the urban deer situation languishes in politics, because our state fish and game agencies simply will not accept deer fertility control. Thus, all our deer work is on federal land.

Over these 14 years the challenge has been to keep this place funded and running. Something I realized from the beginning became very apparent and that is, wildlife fertility control will never pay for itself. It’s similar to an animal shelter – it can’t run without outside help. I knew that, however, and we worked hard at securing adequate funding. Today we even have a substantial endowment, and just last week the ASPCA funded a training annex for us. Construction will begin in the spring. Funding, however, also brought to light an unpleasant dimension of philanthropy. Some groups or individuals wanted to “control” the technology, largely, we suppose, to enhance their own fund raising capabilities or stature in the animal protection world. Some individuals competed with one another, each wanting to have the “credit” for helping animals. You have no idea how fortunate you are ‘Down Under’ with Animals Australia. I know differences exit between various organizations, but you are so much better off than we are with far too little communication going on between animal protection groups. I have tried to promote the federation model here in the U.S. but there seems to be little interest. Tragic. And then we had unsavory competition between research groups, largely because of scientific egos. This has, on occasion, slowed things down too. But onward we move, and next month, to ring in the new year, the PZP vaccine will become officially registered by the U.S. Government, courtesy of the hard work by the Humane Society of the U.S.. 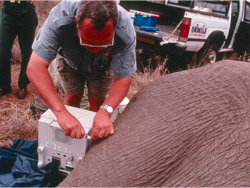 Australia and NZ both have very active wildlife fertility control research programs in force, but they seem stuck in the research mode and have trouble getting to the field to actually solve problems. At least that’s my perspective from here. The story of the Australian effort should be satisfying to you, at least up to a point. After you sponsored that epic visit with us in 1988, it actually led to interest in wildlife fertility control by CSIRO and some academics. It was only two years later that we finally had our breakthrough success and quite a few in Australia started research efforts. The leading force back then was Hugh Tyndall-Biscoe. It was decided to work on “genetically-modified organisms” (GMO). That is, the researchers wanted to take the gene from the pig, that produces the protein that is the backbone of the PZP vaccine, and engineer it into non-pathogenic viruses and bacteria. Then they would be able to spread these around the countryside, infect the target species (without disease consequences or discomfort to the animal) and the gene would express itself and cause infertility in the animal. Well, viruses mutate and once released into the environment there is no way to “call them back”. For example, a GMO designed for Australian foxes might also end up infecting every domestic dog on the continent. Worse, PZP is effective in humans and if the GMO mutated in such a way as to infect humans, we have the makings of a Michael Crichton novel! The end result was that this elegant research was unable to find its way to the field, because of regulatory issues. We knew that from the start but no one listened. Nevertheless, CSIRO and several other organizations, led by Lyn Hinds in Australia and Phil Cowan in New Zealand, are still active with novel fertility control approaches. But many in the world of wildlife fertility control research are making the second mistake – it is taking forever to go to the field and actually help some animals, and thereby catch the public’s attention. That is exactly how we moved the field along over here. You can’t stay in the lab or the corral or the pen forever and keep the public with you. You have to get the technology out there and solve problems.

So, that is a short history of what has happened. Yes, the PZP vaccine would work just fine in your camels. We have been treating camels for years in zoos and we have had great success. The current version of PZP is temporary infertility, requiring periodic booster shots. That is because most of the animals we treat are valued by the public, they do not want to eliminate them, and they insist upon something that is reversible (another lesson – you will only get to do what the public will allow). Some of our colleagues are working on some long-term versions of the vaccine, which will extend the life of the contraception for several years. Then there are species’ differences. For example, if you treat goats or sheep with PZP for just one year, they stay infertile for 4-6 years, but a muntjac deer requires a booster every six months. 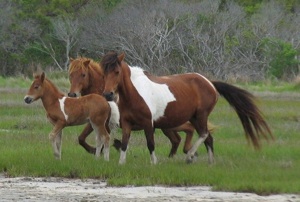 PZP has no effect on pregnancies in progress or the health of the offspring. Some Australian companies have developed and are working with GnRH blockers, in the form of implants and vaccines, but this approach one will change behaviors and cause abortion in many species, something again the public will not tolerate. These contraceptives have many good uses, but they are not the answer in some species.

If the goal is complete eradication, say of a ‘pest’ species such as camels in the outback then PZP is not the route to go, at least if you want to reduce the population fast. It can stabilize population pretty fast, but reducing populations in long-lived species proceeds slowly (we have done it). However, the vaccine cannot pass through the food chain, so it can be used in food animals,

The issue of oral delivery of a contraceptive to wild animals is difficult. Over here our regulatory agencies will not permit any oral contraceptive for wildlife unless it is species-specific, and that is a monstrous problem. For example, our vaccine works on over 100 different species. Then there is the problem of finding something that will not be destroyed by the gastric enzymes. This may ultimately be possible under current regulatory restrictions, but it will take a long time and a lot of money.

All this said, the real problems with wildlife fertility control, today, have little to do with science. They are, in reality, political, cultural, social and economic. The forces aligned against fertility control are often immense and the agendas for the opposition are as varied as the colors of horses! It is here that the scientists have not paid much attention – they labor diligently in their labs but have no idea how to face the non-scientific opposition. The other problem is that the research that is lodged in academic institutions is often conducted by people who are largely more interested in acquiring more research money and publishing more papers than they are in solving real problems. Finally, we have had a few proprietary companies try to get into this because they thought they could make money. I have served as a consultant to several of them and they have largely ignored my advice that there is no money to be made in wildlife contraception. Our work is an extension of the animal protection world and will not survive on its own. We provide the vaccine at 60% of our cost of producing it, because so many who do use it, have very limited funds themselves. This past year we gave away some $17.000 worth of vaccine to those who could not afford it. 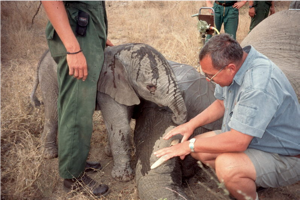 So, we trudge along. I am not so naive to believe that I can “save” all wild animals, but so many years after our first visit to Australia, we have reached the point where thousands and thousands of animals have benefitted by our work and that had made the journey worth every hard minute. When I go to Assateague Island and I see the wild horses living natural lives and knowing that they will live three times longer than in the past, in better body condition, and finally die where they were born, without the hand of man ever being placed upon them, it keeps me going. I just turned 71 last year and I have no intentions of retiring. I tell my colleagues to keep their CPR skills up and Kathie supports my “crusade”. My obituary will be my retirement notice and I hope the Pearly Gates are manned by wild horses.!

00The Difficulties We FaceMuslims and Meat