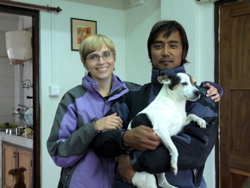 At the best of times, running an animal shelter in a remote region like Darjeeling presents challenges. Daily power outages, limited availability of modern medical resources, and dealing with a public unfamiliar with our practices and our views on animals were all some of the challenges we knew we were signing up for.

But these are not the best of times. Beyond the anticipated challenges above, new and unprecedented challenges have emerged. Since 2006, there has been a resurgence of the agitation for a separate state for the Nepali majority who populate the hill region. The Bengali majority who dwell mostly in the plains region of the state oppose this goal and do not want to see West Bengal carved up. The political machine behind the push for a Nepali state has taken almost dictatorial control of the region, and have been pursuing this goal feverishly for the past few years.

As a means toward their goal, they call and enforce regional strikes whenever they are trying to make a point or to react to some negative development in the progress of their efforts, shutting down the whole of Darjeeling district. This means that all places of business and sources of income such as shops, restaurants, government offices , taxi services, and even schools– everything except essential services like hospitals and medical stores – are forced to close. The idea behind these strikes is that shutting down the whole region, including the places where people pay their electricity bill and other things, will cause a disturbing lack of revenue for the state government, forcing them to pay more attention to the region’s demands. The roads and villages are patrolled by special members of the political party, the GP or “Gorkhaland Police,” who ensure that nobody ignores the strike and opens shops or drives on the roads, unless they are rushing to hospital.

Fortunately, as a medical facility, we are allowed to keep the shelter open to receive anyone who is able to come with an animal in need. Unfortunately, when the strikes are strictly enforced, we are not allowed to drive around to catch dogs as this is not considered essential or an emergency. Thus, strikes severely limit our workload and ability to be proactive.

There are other difficulties to be faced during strikes, too! Because all the shops all must close, we have to stock up on food and any other necessities before the strike begins. We must buy many kilos of meat to be kept in the fridge for the dogs, and large quantities of rice and lentils to make the meat stew we feed to the shelter dogs and any animals we have for treatment twice daily. Fresh vegetables do not keep for long, so often they run out and for much of the strike local human diet becomes very redundant, consisting of rice, potatoes, and lentils. At present there is an extended strike on, but it’s slightly less difficult because it is currently spinach season and almost every housewife has a small garden of it at home, so we can buy it periodically from neighboring families. A few other vegetables like iscus and its root grow naturally among the trees, too, so occasionally vendors will walk the streets and sell what they’ve gathered.

During strikes, it is also very difficult to procure petrol for any emergency trips we do make or so that we can go dog catching during the short breaks that are usually called after 7 or 8 days of strike, intended to allow families to replenish their food supplies. At those times, we wish to be as busy as possible to make up for the lull during the strike, but there is such a rush for gas, and no supply vehicles have been allowed to leave Darjeeling to replenish stores of it during the shut-down, so there is too much demand and not enough supply during these 2 – 3 day breaks. It makes things very difficult all around.

Also during these breaks, the Bengali political organizations in the plains often call counter-strikes, as they wish to hamper the movement for a Nepali state. This means that even when the Darjeeling region opens for 2 – 3 days, few fresh supplies are able to be brought from the plains region where much of the food gain and vegetables are found. Thus, even though the breaks are meant to be a relief to families needing new foods, there is actually little relief to be found among the extremely limited supply.

Clearly, the new political realities have created a difficult atmosphere in which to work. Many challenges and frustrations spring up when we are hampered in this way from doing the work we came here to do. Yet we do our best, trying to work around the strikes as best we can, and to make up for it with feverish work whenever there are no strikes and the weather is also suitable. It may be difficult, but we’re certainly doing our best and we won’t give up on our good work!

Rescue of a dog with a tumour