The photo on the left shows the dispensary at KAS where people bring their animals every day for treatment. These animals are much loved, and thanks to Dr. Pandey, they receive the treatment they need. Sometimes animals are held at the shelter for weeks while they recover. I grew very fond of a little dog which I called ASH due to her colouring and I thought that the previous owners would not return to collect her. It eventuated that they were monks from a nearby monastery and had left Ash for a long time because they thought she would grow more healthy at the shelter. She had been spayed and vaccinated by Dr. Pandey and the monks promised that she would not be tied up. Reluctantly I had to say goodbye to her, but I knew she would go to a good home and that I could check on her any time.

There are many dogs at the shelter which are loving, friendly and intelligent. They have the run of the shelter,(as you can see from the photo on the left) and they sleep outside Alain Dupont’s door in the evening. He has a small house in the shelter where he lives, keeping an eye on the animals.

The photo on the right shows Yogita Chettri, who worked at KAS for many months as a volunteer, attending camps, carrying out and ensuring animals received vaccinations against rabies. In the photo she is holding ‘Ash’. Despite the fact that there was a ‘bandh’ (strike) in Kaimpong and Darjeeling for over three months, the shelters managed to obtain enough food for the animals. A special thanks goes to ‘Animals & Us’, in Sikkim (which was not affected by the bandh), who helped with medical supplies and food.

DESPITE THE BANDH of over 3 months, Kalimpong Animal Shelter has carried out over 45 camps in the past year (April 2016 to March 2017). 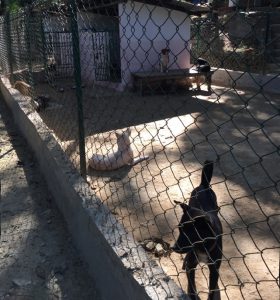 These camps are held in remote villages, often difficult to reach by vehicle due to the bumpy, muddy roads. Dr. Pandey operates the whole day, taking only a short break to eat lunch. The instruments are sterilised by pressure cooker, in the home of people who help arrange the camp and give prior notice to its occurence. Last year at the 45 veterinary camps, in difficult-to-access villages and in these camps 6165 animals were presented for diagnosis and veterinary treatment. 932 dogs were spayed and vaccinated and 96 dogs were castrated and vaccinated. During the course of the ABC programme a total of 932 dogs were spayed and 96 castrated, and 144 cats were neutered. 502 other operations were performed (such as broken legs, cuts and abrasions). Amongst the animals treated were dogs, cats, cattle, goats, pigs, chickens, donkeys and one bird. There were also over 10 rescues and surrenders per week (the pup below being one of them). 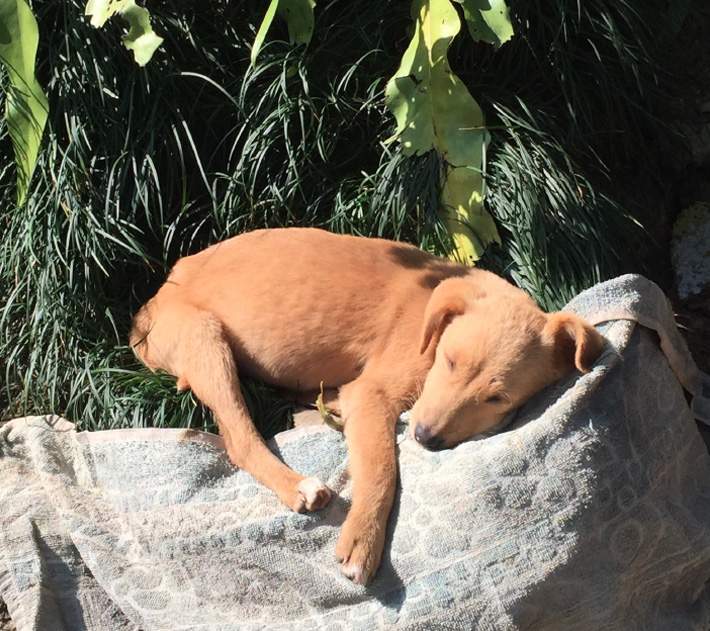 A special thanks to major donors Animaux Secours (France), One Voice (France) Gawler Books, SA, and APN (Sweden) and to our many donors who have helped keep the two shelters running, thus saving the lives of many animals, greatly reducing their suffering.