A MAN & HIS HORSE, HELP IN SUFFERING, JAIPUR

On the outskirts of Jaipur, Help In S 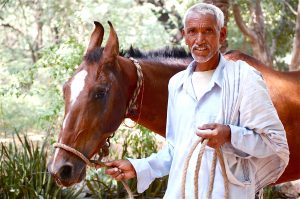 uffering, the animal shelter, cares for many sick animals including horses, camels,dogs and monkeys.

Almost every day an owner of a suffering animal will bring in his/her charge and attempt to get veterinary aid and support when it is needed.

This beautiful creature was brought in by his owner.  The horse was suffering all the painful symptoms of tetanus.  The vets at the shelter knew he needed the antivenin injection which would cure him.  The cost however was prohibitive and the only thing that could be done was to make the horse as comfortable as possible and allow both the horse and owner to stay at HIS (Help In Suffering).

Fortuitously a donor called in to HIS with some money (equal to $200Aus) which was given to Christine Townend,[i] HIS’ patron, to put towards whatever she felt would be best at the time.  Christine knew that the drug which would cure the horse,   cost about that amount and decided that this was where the funds should go.   The drug was purchased, the horse was vaccinated and within a week he was well.

The horse and owner stayed at HIS for about 2 weeks.

As a follow-up to this, each day the horse owner and his family would bring food to the shelter for Christine and staff as payment for saving the life of their beloved horse.  The horse who in fact was the bread-winner of the family.  He is a   wedding horse used by bridegrooms on the day of the wedding ceremony.

[i] Christine worked as Managing Trustee of HIS from 1990 until 2007. During this time, she and Jeremy also founded two animal shelters in Kalimpong and Darjeeling. Christine started Animals Australia in 1980 with Peter Singer (it was then called Australian Federation of Animal Societies). She also started Animal Liberation in Australia in 1996.

Christine continues as a patron of HIS  and this story is an example of the good work that HIS and other shelters do to support their communities by helping their animals.